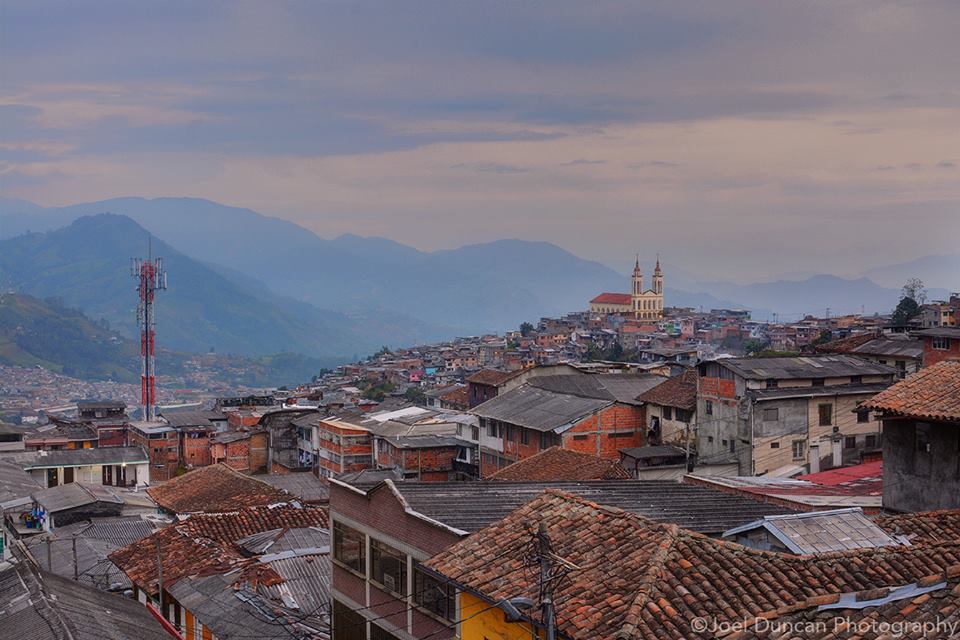 This Halloween was my first time celebrating Halloween in Colombia. I love Halloween, mainly because of the costume parties and reruns of old slasher scary movies. However, this October I was even more excited because I was going to spend it in Manizales, Colombia.

Manizales is part of the Caldas department. It is about 4 hours south of Medellin. If you are lucky, you will get arrive there in the regular 4 hours, but some how some how there is always an accident or some kind of hold up that will make your travel even longer. Nonetheless, the drive is always fun, especially if you head out with a couple of friends. The photo above was taken by my good friend Joel Duncan the last time we visited Manizales.

This was my second time visiting Manizales. I love visiting here and I am sincerely thinking about getting property there in the future. The last time I went, which was 2 months ago was with my friend Joel and we had a blast. So it only seemed right to visit again.

Manizales is like Medellin. It’s a smaller city with a pueblo vibe to it. It’s a bit colder than Medellin, because it sits on top of the mountains. The people are great there, possibly even more polite than the people in Medellin.

Hallowen in Manizales was a great experience! My brother Andrew, and friends Giovanni, Joel, and Juan came along as well. We booked a room at the Kumanday Hostel in advanced, because the last time I was there they told me weekends in Manizales get booked pretty quickly. Kumanday Hostel is in the El Cable area of Manizales, which is where you can find the nightlife.

Before we left to Manizales, we started the guys trip with a couple of shots of vodka, beer and lamb sandwiches… yes lamb!

Beer and Lamb Sandwiches with the Crew.
Left to right: Giovanni, Joel, Me, Andrew, Juan

Vodka shots before we hit the road

After getting buzzed we hit the road. We made it 2 1/2 hours into the drive and stopped for some lunch. We found a great place in a little town called La Pintada. I had pollo sudado and it was delicious. After lunch, we continued driving towards Manizales.

We arrived to Manizales right on schedule. We got there in 4 hours and I was ready to check in to the hostel and destroy their toilet. On this trip I brought my X-Box and FIFA 15, so after check-in we set that baby up and played a few rounds of FIFA before heading out to dinner.

Heading out to dinner

Our dinner that night was 2 large pizzas. The last time Joel and I were here in Manizales, we found this great pizza place. The restaurant was called Las Cuatro Estaciones. This place is also located in El Cable and it is just walking distance from our hostel. Just as the last time, the pizza here was fantastic! After dinner we headed back home and played a bit more of FIFA but this time with vodka shots after every goal scored.

There is one thing you should know about Manizales. During the day, it may seem that there are no pretty girls anywhere in the town. You will walk around, head to the malls, or go to a cafe and you may not see a single attractive girl. That changes at night. They all come out at night as if they were vampires, sleeping all day and wandering the streets at night.

After leaving our hostel and walked over to a little liquor store and bought ourselves a media of Ron Caldas. We hung around for a bit until we got the urge to go dancing. After a couple of drinks and some cigarettes we caught a cab and went to a dance club called Manila. Manila was okay, not so much people as the last time I visited. However, it was great place to start off the night.

The clubs in Manizales end at 2:00 A.M, but do not worry because once they close another place opens up, a placed called 2150. This dance club is pretty huge with a big dance floor in the middle. 2150 is on top of the mountain and has an amazing view from their outside patio. We stayed there for about 2 hours and headed home.

The next morning was a little rough. We only had about 4 hours of sleep and missed our free breakfast. Our plan for Saturday was to head into downtown so everyone could buy a costume. I being super prepared had brought my costume, but these knuckle heads waited for the last second to prepare.

The hangover was too much for all of us and we just continued sleeping, except for my brother, Joel and I because we were playing FIFA. We had a little tournament going on between the three of us, which eventually I won because I lost only one game.

While dominating my brother and Joel in FIFA, we grew hungry so we all headed out to get some lunch. We found a nice little restaurant and had lunch. 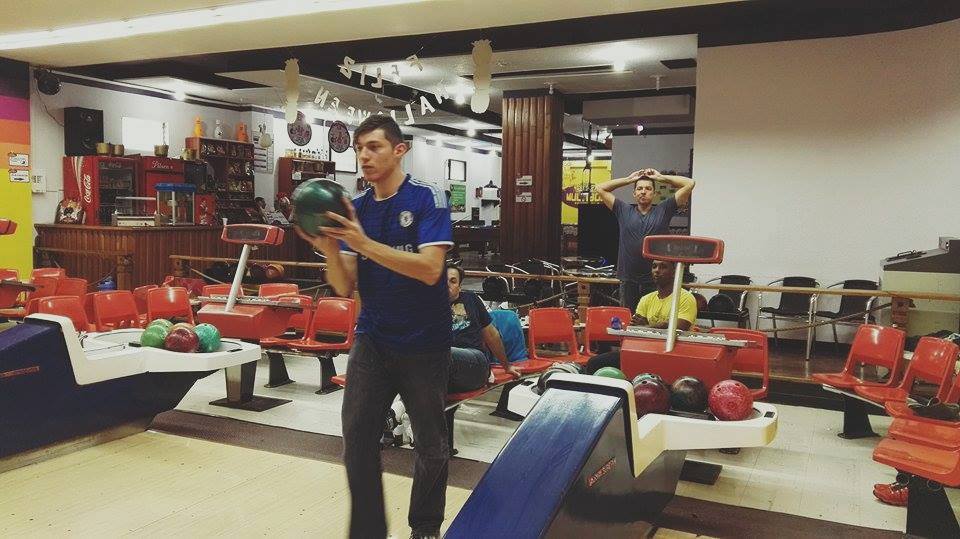 We did do one thing on this trip that we had planned, and that was to go bowling. We started a friendly competition in Medellin the first time we went bowling. The teams are my brother and I (The King Macia Brothers) vs Joel and Giovanni (The Sex Panthers). Going to Manizales the series was tied 5-4 with us winning. We had lost the first game, and killed them next 2 games leaving Manizales up on the series 7-5. Now here in Manizales, they hire people to set up the pins instead of having a machine do, to which I have never seen before.

We finished bowling and searched around for a place to eat. We stopped at place called Asados Chavita and they served the biggest pieces of steak I had ever seen. Sadly I did not have my phone with me so I could not take a picture to show you… But trust me it was good. 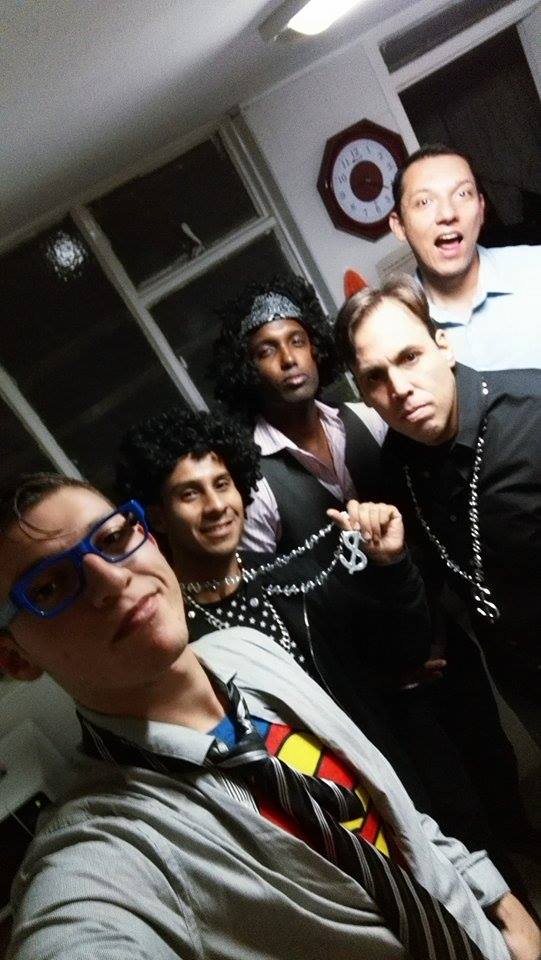 Friday night we left a little late to the bars, so this time we wanted to go out early and be able to talk to some people and see what’s going on for the night. Everyone got dressed. Joel wore a button down shirt with a vest on, a curly haired wig with a bandana. Juan wore the other curly hair wig we had brought with a dollar sign chain, he looked liked an old Aunt or Grandma with that wig on! Giovanni wore the other dollar sign chain and we were calling him Gio Suger Pepper Dady. And my brother was dressed as an adult according to him.

As for me I was dressed up as Clark Kent! I wore a button down shirt, with a Superman shirt underneath, a black tie and used 3D glasses from the movie theaters as glasses. I curled my hair just a bit and I was looking legit!

Again, we walked over to the same small liquor store and started drinking. People were definitely in the spirit of Halloween. We saw many girls dressed up as cats or Minnie Mouse, we saw Duff Man and Duff Girl, and we even saw that Yao Ming Meme! That was probably the best costume I saw. The thing that I noticed most was that girls in Manizales do not dress wear revealing costumes like the girls back in the states do. And to be honest, I thought they looked way more attractive.

We drank outside and mingled a bit and then crossed the street to go dancing at Simon Dices. This place was packed! There were hotties everywhere. We bought a bottle of rum and started drinking and dancing. We saw a couple of people from Friday night and hung out with them. I successfully danced with 4 different girls at that place ;). Out of the 4, it was the girl dressed as a sailor who danced the best. O my did she know how to dance!

My brother and Giovanni went home early that night, leaving Joel, Juan and I behind. We stayed there until the club closed. The wristbands we had were good to enter another club called Milagros but we ended up going home.

Calling it a Night

As we were walking home this group called us over because they heard us speaking English. Two of the girls in that group spoke English, one of them was a fattie and the other girl was just outright gorgeous! I immediately started talking with the beautiful one, her name was Ana Maria from Bogota studying in Manizales. As for Juan and Joel, well they left or something. I thought this girl was so beautiful, she was spending the night over at her friends house who lived just down the street from the hostel. So I walked them home, I got a little make-out session in with her and I was feeling like… well I was feeling like Superman! Sadly we were leaving the next morning, but I gave her my card and told her to add me on Facebook. She never did.

The next morning was also rough, waking up still drunk and again missing the free breakfast. We all had a great time and enjoyed Manizales. I recommend visiting Manizales, it’s a great town and you will not be disappointed.

Me and a lil hottie